The majority of the original pipe work of the organ built by Nicolaes and Jacob Niehoff between 1592/1593 is still preserved today and it constitutes the oldest existent pipe work in Belgium. Back in 1628 this instrument underwent a major enlargement by Jan Van Weert, then an overhaul by Christian Ancion from Huy in 1641. During the 18th century Jan II Posselius, Christian Penceler and Heinrich Möseler made various repairs as well.

But it was not until 1787 that the construction of a new choir gallery on the west end began; with it the plans for a new organ started. However, the execution of the project proved to be far more complicated than expected: two preliminary negotiations from 1788 - first with Mathieu Graindorge and later with the Van Peteghem family from Gent - were both fruitless. It was then that the church turned its attention to Joseph Binvignat and Lambert Houdtappel from Maastricht. The exceptional shallowness of the organ loft made the installation of a Rückpositiv impracticable so the original design contemplated the construction of a vast instrument housed in a single case designed by architect Springel, with 31 stops shared by 2-and-a-half manuals plus a one-octave independent Pedal division.

Several ranks of pipes as well as the reservoirs from the preceding organ were recycled and the instrument was completed in the church in 1793. The following centuries witnessed consecutive adaptations according to the aesthetics then fashionable: in 1840 Arnold Graindorge replaced some of the upper work by foundation stops. Major transformations with romantic accent were done by Theodore Ruëff in 1871 and included the enlargement of the Pedal division, a project that his son Frederic continued in 1892. Yet the final knell for the Binvignat resounded in 1970-1972 when the workshop Pels from Herselt, acting under consultancy of Hans Klotz, built a modern organ reincorporating only a handful of the Niehoff ranks. Luckily enough, five extra ranks were stored and kept in the builder’s shop, so we were able to restore and reinstall them during our reconstruction project.

The present instrument results from the reconstruction of the Binvignat and Houdtappel organ from 1793 and reincorporates all the preserved pipe work that dates back to the 16th, 17th and 18th centuries. Thanks to the relocation of the Pedal chests behind the large “plate-faces” that flank this grand case - which extends literally over the entire width of the nave -, the Pedal division, once comprising only 2 stops, could be enlarged to 5 stops and its rage could be extended from 12 to 27 notes.

A touch of contemporary spirit was given to the console cheeks made in boxwood and lavishly decorated with bone and ebony. We aimed this final aesthetical gesture to be the testimony that this organ, although meticulously inspired in a glorious past, is an instrument built in our century. 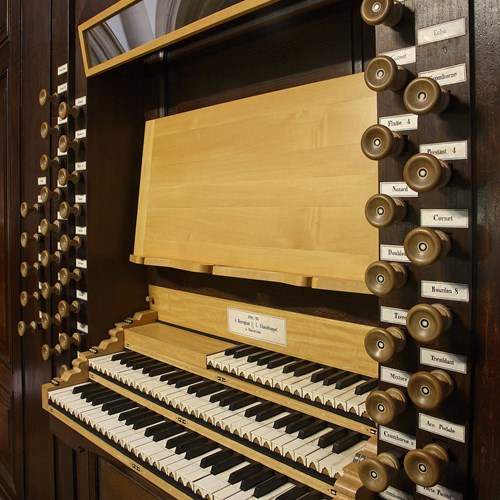