The organ was built in 1851 by the brothers Molinghen, organ builders from Mortier until 1875. The dozen instruments they were known to have built are with one exception, one-manual organs consisting of ten stops and a pull-down pedal.

The specification is of the classic tradition from Liège, enlarged with some 8'- and 4'- romantic stops, but the individual and high pitched mutations of the earlier period were discarded. The case designs of the Molinghen often have baroque style features with their three semicircular towers and a built-in front or side console.

The main aim of the work was a complete restoration of all components including windchest, mechanical parts action, wind systems and pipework.

During the work it turned out that a restoration of the old key action would give such a bad touch that it was decided to improve it. The old system, which consisted in a side console activating the pallets by means of two backfalls and a horizontal rollerboard, was simplified. 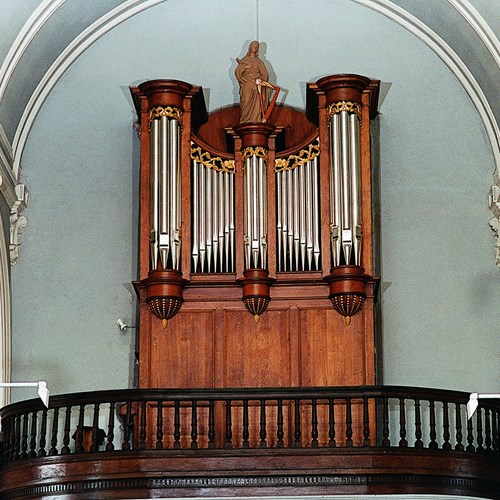