Liège (B) | Saint James the Less

The eyes are caught at once by the luminous blue of the finely carved cases gilded with gold leaf and the harmony they convey. They are dated 1600 and 1602.

The conversion of the measures in old feet and their analysis showed that the whole had been conceived according to the golden section.

Until today the builder of the organ has remained unknown, but the organ may reasonably be attributed to Floris I Hocquet. The different, and almost total, reconstructions of the organ, the last of which was by the famous organbuilder Arnold Clerinx from Sint-Truiden (Belgium), have removed almost all indications which would authenticate the original builder.

The fact that the case dimensions had been empty since 1964 and that the organbuilder was inevitably bound to respect the original case thus provided a unique opportunity to reconstruct an organ corresponding to Sweelinck’ s conception of the typical organ of the peak of the late Netherlands Renaissance period.

This was all the more important since the oldest material witnessing to organs of Sweelinck’s time were often only partly preserved or integrated in instruments imbued with baroque aesthetic and dating at the earliest from the middle of the 17th century.

The specification of the three manual divisions, which are disposed one on top of the other, highlights the sparkling colour and richness of this organ, a sound characterized by marked contrasts. The principals are doubled as was usual in the trebles; the 16’ «Plein Jeu» of the «Hauptwerk» still resembles the Gothic «Blockwerk», and has been enlarged up to 28 ranks. The 'Plein jeux' of the «Rückpositiv» is now of 15 ranks. The «Oberwerk» is mainly reserved for the wide scale Flute stops which enable numerous solo registrations. Among the reed stops, which imitate the wind instruments of the Renaissance, the treble of the Zincke, the Vox humana and the Regal are particularly noteworthy.

The shallow but very high case has enabled the distribution of the stops of a same manual over an upper and a lower chest, a device already used in the middle of the 16th century. The original compass which probably was beginning with low-pitched fa has been enlarged up to a short octave in the «Hauptwerk» and in the «Oberwerk» while it had to be maintained in the Rückpositiv because of the lack of space.

The wind supply consists of four big wedge bellows with one fold turned inwards and, just like the case, has been conceived on the basis of the footmeasure.

The restoration of this instrument makes it possible for organists and listeners to rediscover the musical world of Sweelinck, a world one thought to be totally lost. 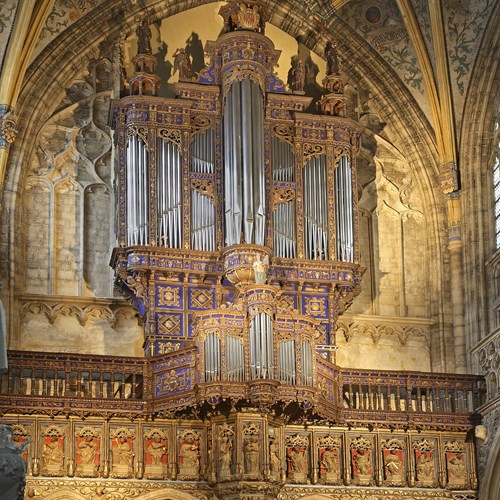 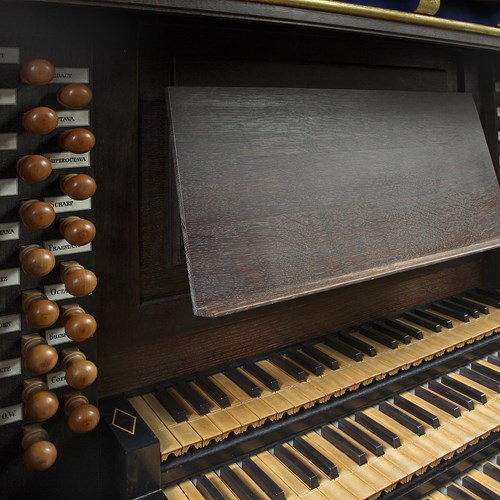 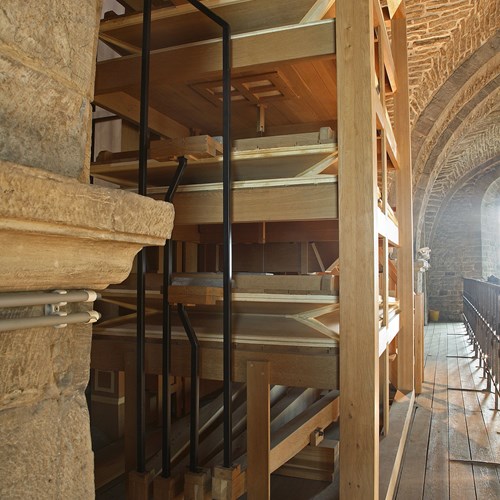