In 1985 and after 73 years of service the cone-valve chest 23-stop pneumatic organ installed in the church tower in 1912 by Jules Geurts from Berchem ceased playing. About 15 years later the Parish of Maasmechelen decided to purchase Clerinxs opus magnum which formerly stood behind that sumptuous case in Saint-Jacques in Liège, later disassembled and stored when our reconstruction of the Renaissance organ began. The Clerinx organ - dormant then since finally found a new home in Maasmechelen. The preservation of Clerinxs exceptional quality of craftsmanship was imperative: console, chests, roller-boards from both Great and Swell, trebles of various ranks and the majority of the manual reeds were all meticulously restored and reincorporated into a new organ housed in a 1912 case, also restored and enlarged. Geurts best pipe work also found its place in this organ, primarily the Pedal ranks.

The new specification was determined by the lay-out of Clerinxs chests, whereas the Pedal division takes inspiration from Clerinxs bigger instruments doted with 2 manuals and independent Pedal division. The Great Organ the only Great he ever built with a 16 Principal  exerts particular impact and is reinforced accordingly by a complete set of reeds that include a 16 Bombard. The Swell contains an extremely rare free-reed Cor anglais 8 and an almost equally rare Voix humaine 8.

Geurts case was considerably enlarged and a new plinth gave place to the enclosed Swell division. 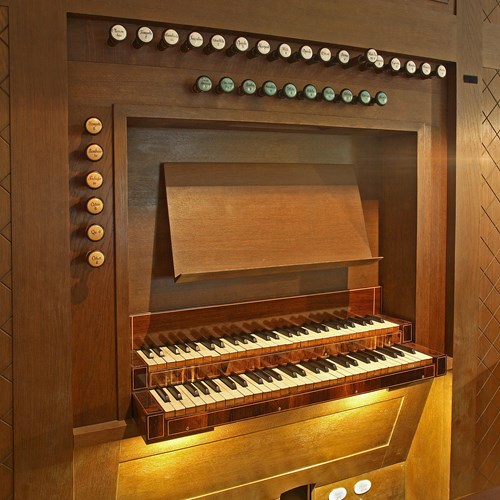 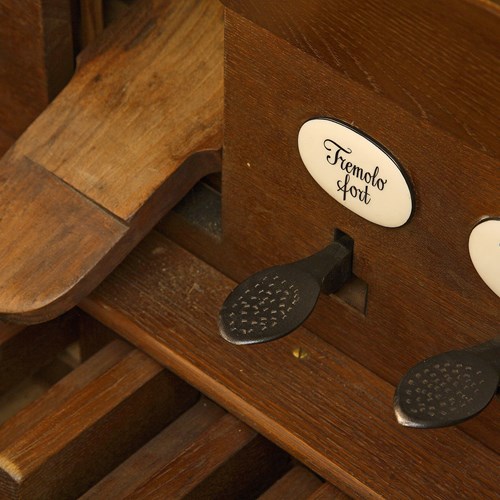